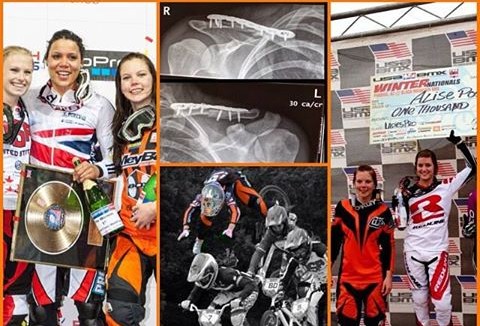 After a lot of struggles from the past couple years, I’ve managed to finally get some good training in the winter of 2012 – 2013. I’ve found the old me back, the one I’ve been looking for since my crash in the 2010 Chula Vista World Cup.

I got on the podium every race weekend. I managed to get my first USABMX podium in Phoenix, AZ & got three 2nd place finishes in the first 4 Euro rounds.  But my most important finish was my 3rd place at the UCI BMX World Cup in Manchester.

I’ve not only found the old me back but I’ve created myself into a stronger person. After the success in the beginning of the season I broke my right collarbone in Argentina.

I was devastated I got injured again, but I knew if I worked really hard I could be back on my bike for the World Cup in Papendal, Holland.

And I was ready to race! I finished 4th in the Super Final. This was a great achievement. Especially I proved to myself I am a much stronger person now than the past couple years. In the race I rode good all day but then in my semi final I made a huge mistake and crashed really hard on the first jump. I was out of breath for a while but when I could breath again the pain wasn’t bad at all until I moved my arm and I knew immediately that I broke my left collarbone this time.

I was really down the first couple days and wasn’t even sure if I still wanted to race. I’ve had to get 2 surgeries in 5 weeks time. It was really tough but when I woke up from surgery I realized BMX is my passion and I was going to everything I can again to make it to the World Championships in New Zealand. Both my shoulders after my 2 surgeries

I fought really hard to get back on my bike as soon as possible and made it to the World Championships. I still managed to make the semi final.

When I got home I had a couple weeks off to let my body rest for the past stressful weeks..

I got back into training for the last World Cup in Chula Vista, CA. I finished 8th in the super final and got to the semi final, where I messed up my gate what got me in a bad position..  I was really bummed but it was a great build up race for next season!

It was a great season, even though I had 2 big bumps in the road. I’ve become a new and stronger person. I couldn’t have done it without my coach, family, boyfriend, my friends , my team , all my lovely sponsors and the medical behind me. Thank you all!